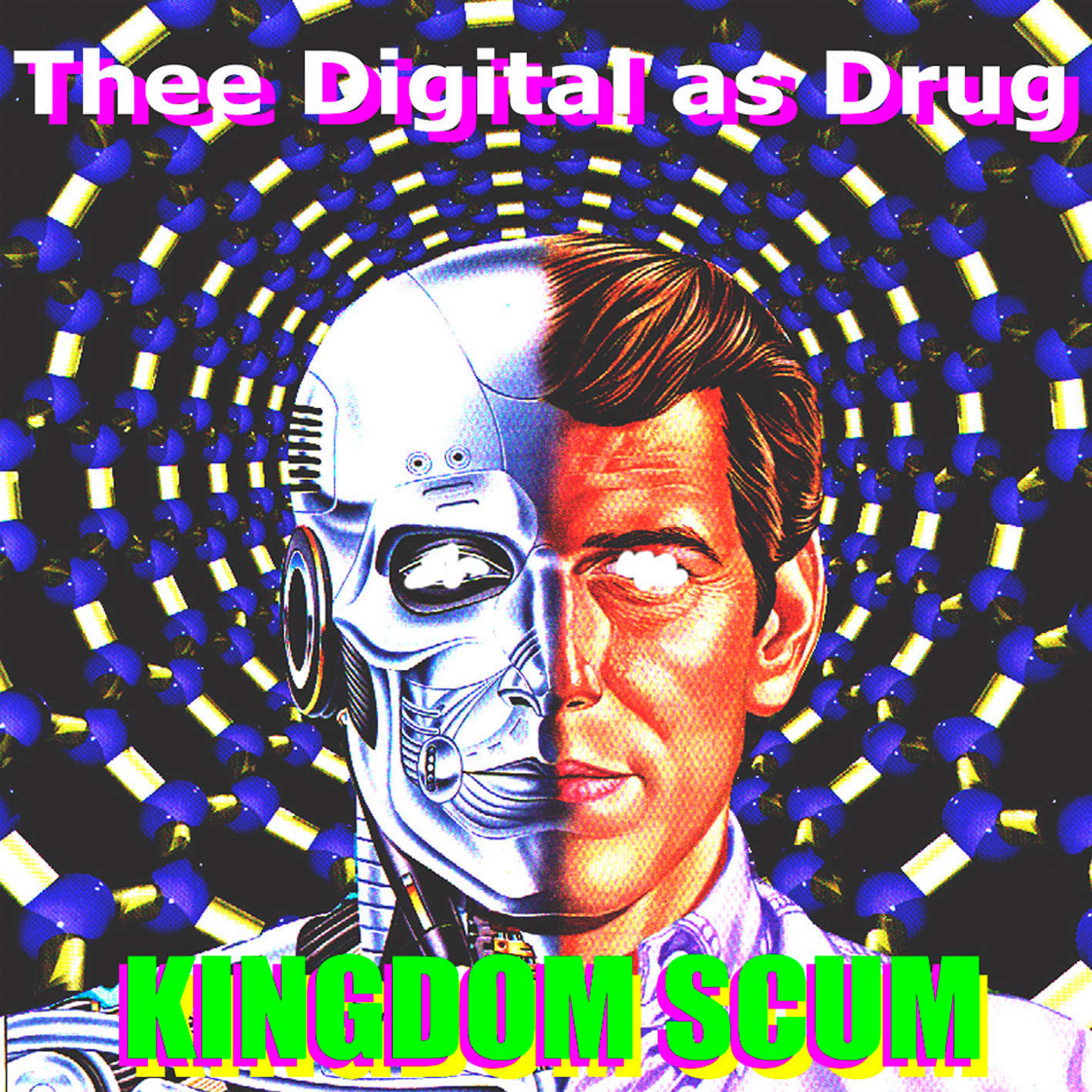 Kingdom Scum Communique 03-10-03:
The tyranny of techno-stress undresses before the bloodshot eyes of your aching head which sways on your strained neck while your hand slowly stiffens to the deadening rhythm of the pavlov's mouse that clicks it. Bite back. Stand in line for somas. Pornographic pixels exhilarate your heart rate like ecstasy for crowds in comas. Pus ejaculates from a thousand metal pricks simultaneously with a sterile syncronicity. Addictionary definition of sucking addickt. Like crackers on crack and hackers that lack direction, a digital erection seems better than none at all. Yet where does it all lead?
When all the worms in the world have mated with every trojan horse and spread every syphllytic symptom & virtual virus to every imaginable hole in your mechanical mind, what sort of reality are you living in? To whom is your home sold? By whom is your soul held? Which broker broke your bank? Which tank do you thank for your rank? Digital privilege at the price of pillaging the global ghetto and the local village. Thee poison of passionless pixels is pumped through the passages of every particle in the pavement of your perception. To wholly question is thee holy selection.
Tomorrow's technology is outdated on the following day. We run like rabid goats about to break our collective neck on the leash of time. Straining to attain the reign of tomorrow today; we run full cycle into the asshole of our initial actions. Cause and infect, we are driving full throttle weapons of mass deception through the precarious turns of our eternal intestinal track. Ailing yet prevailing; derailed and flailing; the sterile mobile, the car of karma, the inevitability of being forced to eat our own entrails. Sailing on seas of disease and wailing while en masse e-mailing 2 femaling mother mary hailing seig heiling beguiling ritual forms filing failing to find a better behind.
The sound of technology is less than the taste of shit. Subsonic battles of class against class. Ass against ass. React to the reaction with simplistic actions. The point of spiritual revolution is no more than a click away. Rape. Murder. It's just a click away. Just a click away. All of your dreams and nightmares are just a click away. Which click? Which way? Energy loaded. Revoltage set on charge. Disappear. Living small and at large. Over the hill and out of mind.

All songs are written and recorded by Kingdom Scum © 2003 except "Cold" (music by Cave Clown Microwave), "End of a Ruling Class" (text by Howard Zinn), and "EYE EAR U-2" (shouting by Eye Yamataka).
Many thanks to Haruo & the Lost Frog Posse. Kingdom Scum:
The current Kingdom Scum project started in 1989 when two friends, an art student and a mental patient were digging through through the dumpster of the latter's treatment center in Richmond, Virginia. There in the trash lay some discarded archives - one of which was entitled "The Documents of Kingdom Scum". The papers were apparently written in 1909 by a former tenant of the institution who had signed their name as "Apuro, sun of the vermin wind". This name later became adopted by one of the two founders of Kingdom Scum. The other, Troy Eeyore, had been working with another project "Eeyore Power Tool" and together they began write music for the ideas and texts in the papers they found. At the same time they began to write their own texts in a similar vein. (Hence, it can be very difficult to draw the line between the original writings of Apuro's "The Documents of Kingdom Scum" and the later additions.)

The basic idea of the original documents was Christian-influenced. The writer took the words of Jesus very seriously: "the meek shall inherit the earth" and interpreted "the meek" to mean bacteria, germs, and other such filth. Yet it was also a call for all people -especially Christians- to abandon society, support the outcasts in their mission to 'infect' society and organize decentralized resistance to all earthly authority.

The 'resurrected' incarnation of Kingdom Scum removed the Christian aspect and added on media critique and more overt political activism instead. Thus, in certain releases such as "Contaminating the Thinking Supply" one can witness both an homage to all things foul alongside outright anti-capitalist tirades. Accordingly, Kingdom Scum has always used various equipment to record material - often blending (or at least alternating) lo-tech and high-tech. According to "The Documents of Kingdom Scum" it is inevitable that less complex low-life systems (such as viruses) shall infect highly complex organisms (such as human beings, society, Internet) and ultimately take them over or destroy them. As the old Apuro proverb goes: "You can't stop a good idiot"

Throughout the years the musical manifestation of Kingdom Scum has taken on various members and helpers. Yet most of the time, Apuro and Troy Eeyore were working together. Throughout the period 1990-1999 Kingdom Scum performed numerous concerts and released various records on various labels (Turn of the Century, Eerie Materials, Staalplaat, etc...). Troy Eeyore (now T.R.O.Y.) moved outside the country in 1997. All collaboration since then has been long-distant and live performances are rare.